Primer to siege combat in Lochac

From SCA Lochac
Jump to navigation Jump to search

This document is intended to complement the SCA Society Siege combat rules and should be read when planning for siege combat in the Kingdom of Lochac. This document helps clarify the significant difference in real world (mundane) weapons laws within Australia and New Zealand vs the United States of America, where the Society rules were based. It also includes a number of medieval siege scenarios that can potentially be used where actual siege engines are not allowed or available to add some additional diversity to our SCA combat playground.

Due to insurance requirements, SCA Ltd Australia has restricted crossbow activity across Australia to stationary target shooting only, where local laws & permits allow them to be used. Although there are technical differences between a crossbow and a ballista, the general attitude of the Australian authorities we have liaised with indicates a ballista will be considered an oversized crossbow so covered by the same legislation.

For the purposes of this primer, cannon and rockets are considered to be powered by pressurised water pressure or a manual mechanism such as rubber bands, either from a tube (cannon) or directly attached to the ammunition without a tube (rockets). Cannons are not allowed under SCA Society Siege Rules. Additionally, "Engines may not use compressed or ignited gases or liquids or combusting materials of any kind to power projectiles." In the US, there have been cases of them being used on the Rapier melee/war field under the relevant "rubber band gun" rules which are separate to the SCA Siege rules.

WA Weapons Regulations 1999 specifically outlaw a "catapult", however upon review of the description they are actually referring to an elastic slingshot with an arm brace, or an equivalent commercially manufactured product without the arm brace. As such, a non-commercially made catapult as defined in this Primer (see Terminology section) should not be an issue.

Within the Siege combat rules, siege engines are divided into to 2 types (Type A and Type B), based on the type of ammunition that they use, with Type A engines able to fire large siege ammunition (anti-structure) as well as small, whereas Type B engines are limited to firing small siege ammunition (more commonly anti-personnel). Both types may also fire regular anti-personnel items (such as combat arrows), often firing groups of these in one go. Either type of engine can be direct or indirect fire. In Lochac, it becomes important to break down siege engines into their different types due to some of the restrictions imposed by regional laws as outlined in the brief summary below.

These are siege engines that are aimed directly at the target. Common examples include:

Ballista
A device designed to deliver a javelin or rock style ammunition utilising a bow like design. Whilst there are design differences, in Australia we have confirmed that the various police departments consider these to be an oversized crossbow and are covered by the relevant legislation. A torsion ballista (each arm separately tensioned) will be considered the same, despite the construction differences and variance in physics utilised to operate these devices.

Cannon
A device designed to deliver most commonly a rock or steel ball via an explosive charge from a propellent (black powder or equivalent) aimed directly at the "enemy". It should be noted that cannons or replicas of cannons are currently banned in the Society rules.

Catapult
A device for forcefully propelling stones, spears, or other projectiles, by means of a wooden arm bent under tension and suddenly released to fire (see image) except for a counterweighted variation (see trebuchet below).

These are siege engines that are designed to fire ammunition that comes down on top of the enemy (or to be fired over walls, etc).

Trebuchet
Powered by gravity, this formidable weapon utilises the long end of an arm on a pivot which was hauled or winched down and then released, allowing a heavy counterweight at the short opposite end of the arm to drop and swing the long end upward through a vertical arc.

Mortar (Cannon) and Rockets
A device designed to deliver most commonly a rock or steel ball via an explosive charge from a propellent (black powder or equivalent), aimed indirectly up into the air.
Note that cannons or replicas of cannons are currently banned in the Society rules.
A rocket (for the purpose of this discussion) is a similar device that is not fired out of a tube. There may be some leeway to use these under SCA rules and/or local laws, although the propulsion may not use compressed or ignited gases or liquids or combusting materials as outlined in the SCA Siege rules.

This scenario represents breaking through either old, failing historical defences, or defences which have been built in a hurry and can be broken through by an armoured combatant with dedication. For this scenario ideally there would be 2 or 3 “weak points” which both sides are aware of such that the defenders actively defend any combatant approaching these points. Each "weak point" section of wall is represented by a combatant and/or marshal next to marked wall section with a fixed (or random) number of lives (say 10). Each time the combatant (or the delineated wall section) is hit, the countdown continues. When 0 is reached, a hold is called and the wall section is opened (potentially haybale wall gets collapsed or section of fabric wall is removed as relevant to the scenario. 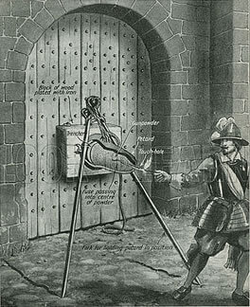 Gates are closed and defended, you have to run a petard and mount it in place to open the gates, you then need to take the castle.

A petard was a bell or funnel shaped metal enclosure, filled with gunpowder which was braced hard against the door through which entrance was required. Fuse was lit and the petard fired, hopefully blowing a hole in the door. Once the petard is mounted in place, the marshal can count several seconds and then call hold. Anyone directly in front or behind the petard can be called dead (either from the explosion or from the petard becoming a missile in away from the door). A rough access way should then be made in the "door" of the fort (potentially opening an existing door in the fort structure or moving haybales, etc). Kill range should be agreed prior to war.

This scenario uses an item representing a battering ram - a basic example would be a heavy log with 4 ropes attached, allowing four fighters to carry it to the gate or wall of the "fort" which has been identified as vulnerable to siege attack. The marshal(s) will need to be involved in supervising the timing of the attack, and call a timeout at a suitable time, allowing the marshals to remove the relevant door and advise any defenders if they are injured by the doors being broken open. Multiple scenarios could be combined for greater variation.

Scenario includes a "walled" defensive structure as well as a portable structure representing an armoured siege tower (a fixed number of armoured combatants carrying a cardboard surround built out of cardboard boxes). The siege tower is immune to arrow fire and needs to be hit a number of times (example 10) to be stopped (at which point the fighters inside can leave from the rear and participate in the battle). If the siege tower successfully reaches the "walled" defensive structure, the whole battle / or this section of the battle, can relocate to a separate area which represents the top of the wall, in a similar way that bridges and rivers are marked out on battlefields. Anyone falling from a wall (one foot off) is considered "dead". For a more basic version of this scenario, simply lay out a siege engine against wall and commence the battle at that point. To soundly represent the attackers securing a solid bridgehead on the defenders walls, I recommend having fixed location flags within the defensive lines (perhaps 3) and the defenders need to secure at least 2 flags to win. Could be run as a timed event, 0 flags = Defenders victory, 1 flag capture = draw (fight for a further several minutes), 2 flags captured attackers victory.

Sapping describes the construction of tunnels to mine underneath the walls and other defences of a defensive location such as a fort. Many such attacks would have been started within sight of the defenders who had a variety of strategies they could employ. For the purposes allowed the concept has been simplified.

For the purposes of an SCA battle, it would be best to use this as an option available to the attackers through-out the series or day's battles, with a brief summary of how it will be executed at the start of the day.

For each battle where there is a defender located within a defensive location, the attacker can be given the option to have been undertaking sapping works. If they choose to participate then an appropriate variation on the following could be applied.

The attacking army must allocate 25% to 40% of their attackers to the sap. The allocated troops may not participate at the start of the battle but must wait at the rear or out of sight (in a scenario where the attacking force have multiple lives, keep them visible at the rear for greater "reality".

At a time after the attack decided by the marshal, a general hold is called. A location within the walls of the defensive location is selected and the tunnel exit is marked on the ground with rope, hay bales, chalk or equivalent. The attackers are established with a small number of fighters on the edge of their tunnel exit, with the rest of their attacking force in a line out through a wall or equivalent (representing them queued up in the tunnel ready to storm the defences). A lay on is called and the battle continues - for the sap to work well, the attackers need to form a strong bridge head immediately, to allow the rest of their fighters to get out of the tunnel, otherwise they can be bottled up and held by a small number.

Where this scenario is being utilised multiple times in the same location, it would be best that the marshals randomise the breakout location - although they should discuss with the commander of the attackers if there is a particular location being targeted (as they should appear close to their target if there is one).

Alternatively, the sapping could be done simply to undermine a wall. A short hold could be called and the wall removed (replaced with rubble). When lay on is called, the reserve forces can immediately attack through the new access point.